This blog is an extension of part I & this too highlights the pros & cons of the React Native framework & Flutter framework based on a few more parameters. 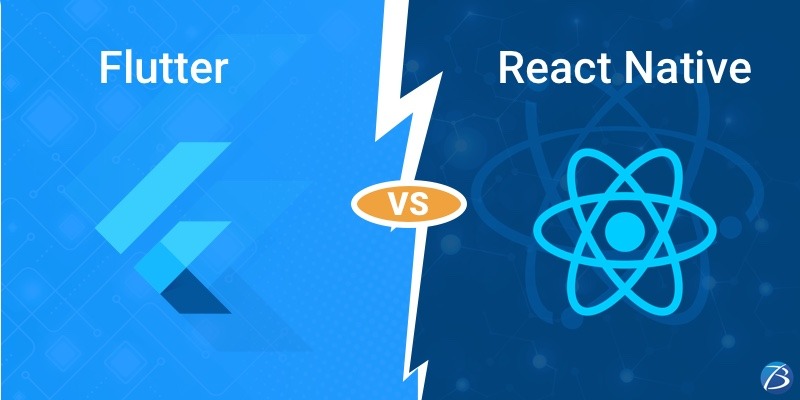 In Part I of this blog, we had compared the frameworks- React Native and Flutter based on numerous vital parameters. You may have a glimpse at Part I here.

This blog is an extension of Part I and here too, we will be focusing on a few more significant parameters to do a more detailed comparative analysis of both technologies.

We presume that by the end of this read, you will have better clarity on which framework is the best pick for your project development requirements. You will easily be able to decide whether to go with React Native app development or Flutter app development. So let’s quickly get started. 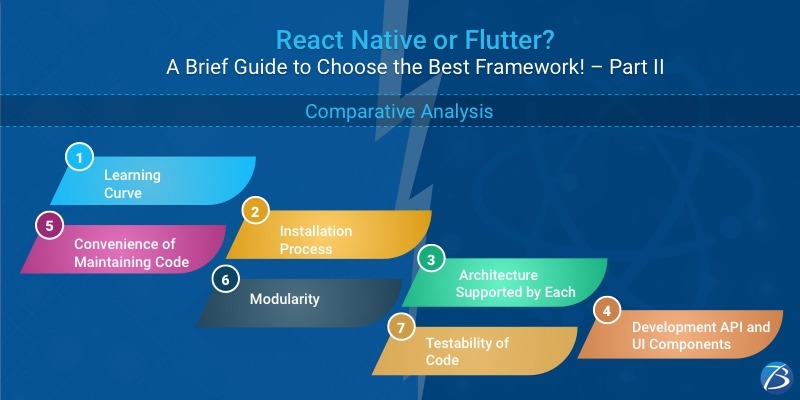 The learning curve of React Native is quite easier especially for those who are familiar with JavaScript. But working with React Native may get a bit difficult when it comes to mobile app development, though the framework has released several libraries, tutorials, documents, etc. to make the learning of this framework easier.

Flutter too is not much difficult to learn. To understand this framework, developers need to learn the Dart language, which is pretty simple along with some basic knowledge of native iOS and Android development. However, this language is rarely opted by developers due to its low popularity.

Node Package Manager (NPM) is required to install the RN framework. NPM can install the packages globally as well as locally. For this, it is essential for the React Native App developers to have knowledge of the location of the binary.

The installation method of Flutter is a bit tedious and can be enhanced by supporting package managers like MacPorts, Homebrew, APT, YUM, etc. so that users can get rid of performing the extra steps while installing.

Architecture Supported by Each

The latest architecture of React Native is based on 3 important threads namely: Native thread (where native code is placed and executed), JavaScript thread (where complete JavaScript code is kept and compiled), and Shadow thread (where the app’s layout is calculated).

React Native has a bridge between JavaScript and Native threads. According to this feature, the JavaScript code communicates with the Native API and the platform. Also, when it comes to iOS, RN makes use of JavaScriptCore separately for running all codes, whereas in the case of Android, it bundles the JavaScriptCore within the app. This will result in the increase of native functionality, however, it also increases the size of the app and that results in device lag or performance issues.

Flutter has a layered architecture. Developing a basic app in Flutter starts with platform-specific widgets or top-level root functions. Next, it is followed by basic widgets that communicate with rendering layers and the platform. Animation gestures exist just beyond the rendering layer, and this animation gesture transfers API calls to the foundation of the mobile app; also called Scaffold. It is run by a platform-specific embedder and a C/C++ engine. For separating the presentation layer from business logic, the Flutter app developers can utilize Flutter BLoC. Such an architecture eases the creation of complex apps with the use of simple and small components.

There are very few features and functionalities available in core React Native. The RN framework comes with just device access APIs and UI rendering. But using third-party libraries, this shortcoming can be overcome. For accessing native modules, RN makes use of several third-party libraries. You can find the list of the best-known UI component libraries here.

On the other hand, the Flutter framework comes with device API access, UI rendering components, testing, navigation, stateful management, and a plethora of libraries. In Flutter, you will have access to everything required for architecting mobile apps and, there is no need to use third-party libraries in Flutter. It also comes with widgets for Cupertino and Material Design that enable the developers to render the UI on both Android and iOS platforms with ease.

It is a bit difficult to upgrade and maintain code in React Native. One of the reasons behind this is the dependency on third-party libraries. Usually, the libraries are old and outdated and cannot be properly maintained, thus, affecting the code maintainability. Besides, there are chances that when the developers fork the code to suit the app requirement, it may interfere with the framework’s logic and slow down the overall development process.

On the contrary, code maintenance in Flutter is quite easier. It has simple code which allows the Flutter app developers to easily find issues, support third-party libraries, and even source external tools. Also, the hot-reloading property in Flutter is comparatively better than that in React Native and it helps to resolve several issues quickly.

Note: Modularity refers to the ability of a framework to enable different professionals with diverse experiences and technical skillsets to work under a single project.

React Native offers less modularity support. At times, ReactJS developers, iOS developers, Android developers, etc. working on a project, may find it tough to match-up with each other.

Comparatively, Flutter provides better modularity for team diversity and also supports well while dividing the project codes into separate modules with its pub package system. The teams can easily add/change a code-base or construct various modules with the plug-in ability.

In React Native, there is no official support available for integration testing and UI-level testing. It offers just a few unit-level testing frameworks. Tools like Jest can be utilized for snapshot testing. Also, there are some third-party tools like Detox and Appium that can be used for testing the React Native apps even these aren’t supported officially by React Native.

Since Flutter functions with Dart, it provides excellent support for automated testing. Also, it offers a rich set of features for testing the applications at integration level, unit level, widget level, etc. Furthermore, it offers detailed documentation on testing the Flutter apps.

In this fast-paced digital era, having a high-quality, user-friendly, and responsive mobile app for your business is crucial. For developing such outstanding mobile apps, both React Native framework and Flutter framework have proved to be apt technologies. But which of these is the best pick for your project?

We have tried to explain that through this blog and its Part I. We hope we have imparted you an in-depth understanding of the good and the bad of both technologies. Also, these blogs will help you make an informed decision on whether to partner with a Flutter App Development Company or go for React Native App Development Company.

To know more about our other core technologies, refer to links below

All You need to know about the Latest Updated React Native Architecture!
Gather useful information about the new architecture offering for some of the React Native modules to address the existing developmental issues.

Ionic or Flutter: Which App Development Framework should you choose for your Next Project?
Ionic and Flutter frameworks excel in cross-platform app development employing a single codebase. Yet, they are different from each other and are suitable for specific project requirements.

Crucial Mobile Application Statistics that every Business must know!
The latest mobile app industry statistics will enlighten you on current trends and help you adopt the right strategy during mobile app development.

Top Steps to Develop Mobile App Successfully
Whether you’re a traditional retailer or a company selling more abstract services, providing your customers with constant access is one of the most important methods.

How to Create an Agile Culture in Your Workplace
The ever-changing reality of regulations and new advances in technology make it more important than ever before that companies adopt a strategy of agility.

What is The Future of DevOps?
A strong understanding of DevOps can help you improve the quality and efficiency of your mobile application development, but the way this promising methodology works is fluid.
Mobile app developer IT Service Mobile Apps Development Software development Web Design & Development
Business details
Biz4Solutions LLC
We at Biz4Solutions are based out of Frisco, TX and work with developers working from Pune, India. We mainly focus on building complex custom software solutions for our enterprise customers.
×