Influence of Fast Refresh Feature in React Native 0.61 on the Developer Community!

This blog outlines the latest features of React Native 0.61 and also explains the Fast Refresh Feature with its impact on developers! 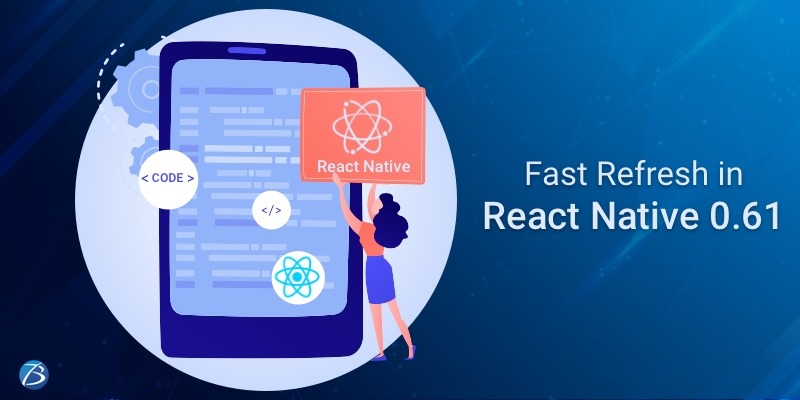 What are the Persistent Issues in the React Native Framework?

What Features are Covered in React Native’s 0.61 Version?

How does the ‘Fast Refresh’ Feature in this Update Impact the Developer Community?

All such questions about React Native 0.61 version will be covered in this blog. We will especially elaborate on the Fast Refresh Feature in this blog. So without much delay, let’s get started.

React Native 0.61 is quite a small update comparatively. It is an attempt to resolve several persistent issues present in the older versions. The broken hot-reloading feature was one of the biggest pain points for React Native App Developers and the Community. This new update majorly focuses on a new reloading experience called Fast Refresh. With this update, the developer community can heave a sigh of relief.

But before looking into features in this new version, let’s have a quick look at the persistent issues in React Native. Like any other technology, this technology had several shortcomings and no matter how small, but these shortcomings did affect the overall mobile app development.

Hot-reloading Issue: Being one of the most popular features of React Native, the hot-reload feature got much attention from the developer community. But sadly, it didn’t go that well and especially failed to work appropriately with Stateless Functional Components (SFC). In the React Native 0.61 version, this issue has been fixed, and now, reloading any React Native code reliably is possible without reloading the complete application.

Time-consuming Updating Process: Updating React Native from an older version to a new one is tedious and needs a lot of time. This process especially becomes highly time-consuming in case the React Native Developers haven’t installed a few updates and then want to update it once for all.

Sudden App Crashes at Times: Several times, React Native apps can crash suddenly and there is not much information available to know the reason for such app crashes.

Finding Main Reason of Exception: Finding the main reason for the exception is quite challenging in the React Native framework. Stack trace in the Chrome debugger console makes the debugging process much time-consuming. In this case, component DidCatch also doesn’t seem much helpful.

Issues with Ram Bundle: The ram bundle of React Native isn’t supported by any OTA platform like CodePush. This issue is caused since React Native community is not connected widely.

So, to overcome such challenges and solve the existing bugs, React Native 0.61 was introduced. New features in this version will help the developer community to leverage an improved development process and also result in a better end-product.

Notable Features of React Native 0.61 and its Impact on the Developer Community 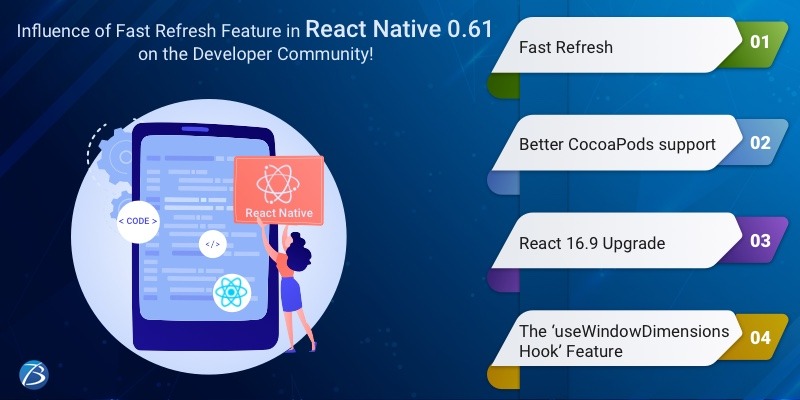 Better CocoaPods support: A few updates in the 0.60 version of React Native were by default made to integrate CocoaPods. But this leads to several issues in the use_frameworks! But thankfully, this issue is being worked upon and fixed in 0.61. After this update, it has become much simpler to integrate React Native into the iOS projects that are developed with dynamic frameworks.

React 16.9 Upgrade: In this version, there have been improvements to act. Also, the old names for the UNSAFE_ lifecycle methods have been deprecated.

The ‘useWindowDimensions Hook’ Feature: Hook is another fascinating feature introduced in this version that offers and subscribes to dimension updates. This feature can be used instead of the Dimensions API in several cases.

Fast Refresh: The “hot reloading” and “live reloading” features have been unified into a single feature called “Fast Refresh” for addressing the hot-reloading issue. This update is quite helpful to the developer community and every React Native App Development Company. So, let us have a quick look at what’s so impressive about this feature.

Significance of the Fast Refresh Feature

The hot-reload issue needed enhancements for a long time and in this update, it has been addressed. So, what are these enhancements, and how is these will impact the developers as well as React Native App Development services leveraging this framework? Please read along.

We have seen several features of React Native 0.61 version along with its Fast Refresh feature. About this feature, the developer community finds it much flexible to use. It works well for both functional components and class components. Though it is almost similar to the hot-reloading feature, this time, it is much more efficient and excellent in performance.

Where Are We With React Native In Web, Windows, And MacOS?
Find out the current state of React Native for web, windows, and macOS along with its history and benefits.

Flutter Vs React Native Vs Kotlin: Which One for App Development In 2022–23
Flutter, React Native, and Kotlin, are the three leading mobile application development platforms.

All You need to know about the Latest Updated React Native Architecture!
Gather useful information about the new architecture offering for some of the React Native modules to address the existing developmental issues.

ReactJS vs React Native: A Comparative Analysis!
Learn about the React Native and Reactjs frameworks, the most notable differences between them as well as their share of pros and cons.

Consider The Top Emerging Mobile App Development Trends
Guess how many apps there are on the leading app stores? Do you have an idea? Well, Google App Store has more than 2.8 million apps and more than 2.1 million are available on the Apple Store.

Mobile Apps vs Web Apps: An Explanation for Non-Developers
In this age and day, most people have interacted with apps in one way or another. There are apps for all sorts of things; from food recipes to personal training manuals.

What is the MEAN Stack and Why is it Better than LAMP
The MEAN software stack is a popular set of technologies for creating websites. It consists of MongoDB, Express. js, AngularJS, and Node. js.

Top Steps to Develop Mobile App Successfully
Whether you’re a traditional retailer or a company selling more abstract services, providing your customers with constant access is one of the most important methods.
Mobile app developer IT solutions Web Design & Development Hire React Native App Developer
Business details
Biz4Solutions LLC
We at Biz4Solutions are based out of Frisco, TX and work with developers working from Pune, India. We mainly focus on building complex custom software solutions for our enterprise customers.
×